10 Reasons Why Smoking is no Longer Cool 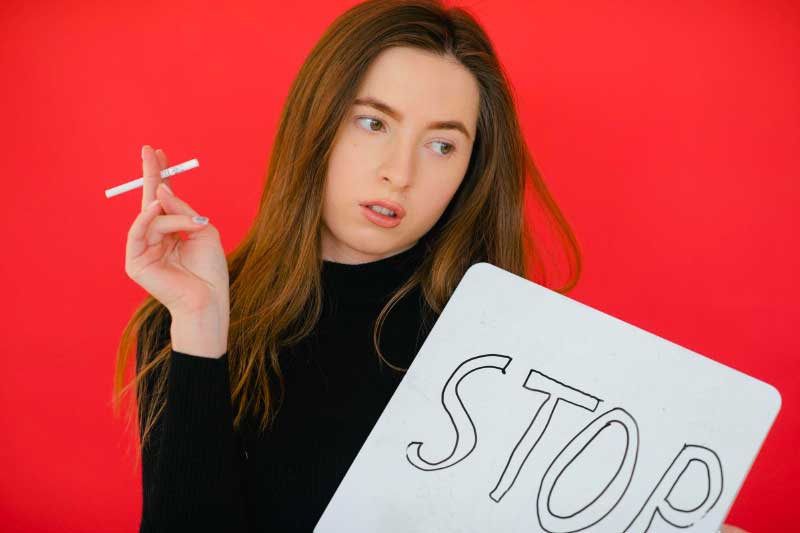 Smoking is a dating deal breaker

Over half of college girls surveyed in a Whatsgoodly poll from Johns Hopkins University have reported that smoking is a dealbreaker for dating.

Comments on the poll further showed the visceral responses that smoking brings up, even amongst the college audience.

10 reasons why smoking is no longer cool

1. You can only date other smokers

Smoking seriously limits your dating pool. It’s a lose/lose situation. Dating smokers limits your friend group to those who smoke and those few non-smokers who can put up with it. And let’s face it, smokers do tend to be depressive and perpetually marinating in the ennui of life. That’s a pretty bummed-out friend circle to find yourself stuck in.

On the other hand, dating a nonsmoker is a non-stop guilt trip party from hell. There’s nothing that kills a decent nicotine buzz like the incessant nagging of a non-smoker who “just wants what’s best for you.”

Let’s make one thing clear—working out has always sucked. But if you’re a heavy smoker, you know that it is indeed possible for it to suck more.

Smoking actually decreases your endurance, which makes working out a total pain in the ass. It’s also easy to get winded when jogging or doing other types of cardio.

This can cause a cycle of inactivity, which only results in more smoking and, thus, more inactivity. Mega bummer.

3. You can lose your senses

We mean this in the literal sense here. The ability to hear, taste, and touch is severely affected by smoking cigarettes. One study found that smokers are 70% more likely to experience hearing loss in their lifetimes.

One positive outcome of hearing loss is, of course, the ability to tune out your anti-smoking friends who are continually nagging you to stop smoking. We’re going to count this one as a plus.

We all know that smoking is expensive, right? But exactly how expensive is it? Some studies cite additional factors like health-related costs, but we’re going to keep it simple here.

The average cost of a pack of cigarettes in the U.S. is $6.36. If you’re smoking a pack a day, you’re already spending close to $10k in your four years of undergrad alone.

You’re probably already imagining what you could buy for $10k. Yacht tour around Europe? Backpacking the world? Kiss that pack of doge-style Akita dogs goodbye. A sweet apartment off-campus? Gone. It’s all gone up in smoke.

This one surprised us, too. A study found that factors that contribute to saggy boobs include smoking cigarettes, among other things like cup size and age. Ok, maybe boob-perkiness isn’t a huge concern of yours at the present moment, but think about your future.

Are you sitting down? You may want to sit down for this. Apparently, men who have been smokers or are currently smokers are 30% more likely to suffer from erectile dysfunction.

And we have all seen the erectile dysfunction pill commercials. Simply put: there are side effects. Serious side effects. Remember, impotence hurts you and the ones you love. Very uncool.

7. It kills your pets

If you’re not worried about secondhand smoke harming your friends and family, consider the fact that smoking can actually kill your beloved pets.

Researchers found that secondhand smoke increases the frequency of cancer in dogs and cats. Being an asshole to your pets is pretty much the lamest thing ever.

If Amy’s faces of death didn’t kill the smoking trend, then we don’t know what did. How could we forget about the drug-crazed shenanigans of poor Amy? Remember that time she lost a tooth and didn’t bother to replace it?

Let’s keep it real—Amy was definitely dabbling in more than just some light smoking. However, she permanently shattered the image that smoking could ever in any way be cool.

9. For the love of your teeth

If you smoke for more than a few years, you’re going to be combatting some serious dental problems. We’re talking yellowing teeth, weird breath, and even gum disease and tooth decay.

We all know that a trip to the dentist is just about the least fun thing out there. So, save yourself time, trouble, and money by ditching the habit before your teeth get out of control.

Now that it’s legal to buy high-grade marijuana locally, why even dabble in cigarettes? Nearly half of the States have legalized medical marijuana. Not to mention, pretty much all the research shows that cigarettes are slowly killing you and everything you love.

Though, research on weed seems to prove quite the contrary.

Published research has linked marijuana usage to regulating body weight, treating ADHD, and promoting creativity. In addition, marijuana has been found to help with skin cancer, arthritis, PTSD, and a ton of other diseases and ailments.

Most importantly, many studies cite that there is no proven link between lung cancer and smoking marijuana. It seems we can hit the bong, at least for now, with no worries.