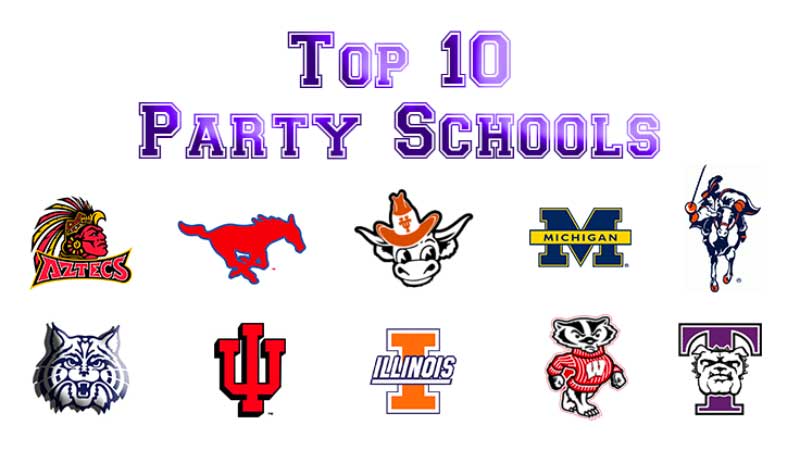 Many would argue that college isn’t complete without partying—that partying is actually a quintessential cornerstone of the American collegiate experience.

What do you think? Will your school make the Top 10 list?

Team Whatsgoodly struck out to investigate the college party scene by comparing votes from over 8,000 student responses from the Whatsgoodly app.

Here’s how we ranked the schools

We used three questions to determine the top party schools in the U.S.

We polled students across the nation using three distinct polls aimed at measuring student opinions regarding partying at their university.

There’s something different about the colleges in the Midwest. Students love to party harder and more frequently than normal. Bloomington is no exception to this stereotype, with 87.81% of surveyed students claiming a party life that occurs 2-5 nights a week (#1 overall in the USA).

This small town is filled with a HUGE 40,000-student population, so the students at U of Indiana know how to get creative with their partying.

In the past year, five IU fraternities have been suspended or expelled for violations of alcohol policies, so maybe a bit too creative?

Indiana University students: Your dedication to the mayhem is why you ranked #1. Now go celebrate with a party?

There aren’t many places like Madison on a college football game day. Breese Terrace, and its transformation into house party central, is one-of-a-kind and is accompanied by the beer gardens on Regent Street, which are always full of rabid Badgers fans.

From the Wisconsin students polled, 91.8% stated they saw Wisconsin as the top party school in the nation (#3 overall in the USA).

University of Wisconsin students are known for the enduring dedication and courage they display when the drinking begins, as most students are passed out before the games start… even with Wisconsin’s home games starting at 11 o’clock.

Out-of-town students might say that the Tucson scene isn’t up to par with ASU, but they’re dead wrong. While U of A students know how to hit the books, 96.91% of U of A students polled proudly named their school the top party school (#1 overall in the USA), showing off their horde-like mentality towards partying.

Downtown Tucson, Congress Street, and Fourth Avenue all have a bar or club for just about any sort of personality, and the Greek life is well known for throwing some seriously wild parties.

Dubbed the “School of the wet and wild,” U of A supposedly won this reputation from the annual pool party held by Sigma Alpha Epsilon, which of course, features a 65,000-gallon pool, fully-functional waterfall, and the always faithful fake tree house “butt hut.”

Similar to U of A, Illinois is proud of their partying culture,

with 88.57% also naming their school the top party school in the nation. (#5 overall in the USA). Champaign, IL, offers a plethora of partying that includes a gargantuan Greek life, the Pygmalion Festival (which has a music lineup rivaling the nation’s best festivals), and bars like Highdive and the Canopy Club, who are known for hosting the best acts in Chicago.

But come March, all hell breaks loose during Saint Patrick’s Day, when thousands of students skip class to start the day-drinking debaucheries at sunrise, continuing until they actually believe they have become Irish.

#5 University of Texas at Austin

Austin, Texas, is known around the world as a weird and crazy place that never fails to deliver a kickass party. While Sixth Street is the bread and butter of the young and rowdy, Rainey Street is quickly becoming the go-to for upperclassmen and the “sophisticated.” The Greek scene is the better-known crown jewel of the UT party scene and is responsible for the insane Round-Up Weekend, where every fraternity shows off their levels of rage and competes to see who can have the biggest party (budget).

The streets are filled with neon tanks, fanny packs, and beautiful women from around the nation running from party to party. The UT party scene is powered by the gigantic Frat Houses spread throughout West Campus and a bar scene that can compete with Bourbon. The size and scale of the Austin party allow all 55,000 students plenty of opportunities to let loose and have fun.

The University of Virginia, or Mr. Jefferson’s University as the insiders call it, is well known for their academic prowess, but more importantly for their nefarious and wild parties. Greek life is prominent at UVA, boasting around 30% membership of the student body.

Amongst polled UVA students, over 80% proudly stated they party an avg. of 2-5 nights a week (#4 overall in the USA). Charlottesville, VA, may not be Los Angeles, but it still has more than its fair share of great music venues, beautiful women, and rivers of beer to drink from. Thomas Jefferson would be proud.

“The Michigan difference.” This catchphrase works because it’s true—those damn Wolverines study hard and party so much harder. The Michigan party world thrives on old traditions like “The Pit,” a shared backyard between frat houses known for its rowdy Saturday-morning tailgating.

House parties galore are found in Ann Arbor, with students rolling the kegs to the party down the street after their party gets shut down. Win or lose, Michiganders still booze, giving the Wolverines the prestigious award for “Most Ambiguously Proud School Spirit.”

The Whatsgoodly app polled the students of San Diego State and discovered that over 1/4th of them felt that partying should always come before academics (#7 overall in the USA), and this is definitely backed up by their strong frat scene. While the Greek parties generally get all the attention, house parties frequently occur just as often as the frat throw-downs.

The Whatsgoodly app polled the students of San Diego State and discovered that over 1/4th of them felt that partying should always come before academics (#7 overall in the USA), and this is definitely backed up by their strong frat scene. While the Greek parties generally get all the attention, house parties frequently occur just as often as the frat throw-downs.

When it comes to “going out” in Dallas, things can get a bit confusing with the around 2,000 bars within the Dallas County line. This includes the infamous Idle Rich Pub and the hip Avenue bar. Both of which could explain how the nickname “Southern Methodist Millionaire’s University” came to be.

It comes down to who can ball out the hardest, and in college, that means great parties. Lastly, The Boulevard. The hot and sweaty mess that all students associate with and love. I’ll go ahead and dry clean my sear-sucker for the (hopefully improved) next season of Mustang Football.

Welcome to Kirksville, MO, located right smack in the middle of fucking nowhere. The school is boasted as the “Harvard of the Midwest” and is known for their enduring Christian values, which usually doesn’t make for a great party school…Truman State is an exception.

They love football, Jesus, and Budweiser, and 34.22% of students prioritize partying over academics (#2 overall in the USA). At Truman, Greek life is known to rule the partying, which is proudly open to all students, Greek or not. This congregation might explain why partying is such a cultural and proud pastime of Truman students. Because honestly, what the hell else are they going to do?

If you see your school missing, contact us to get Whatsgoodly started at your school!

Make your voice heard by voting on Whatsgoodly polls

Our poll data is precise, but to call this list complete would be a dishonor to the campuses around the nation not on this list. Giving a bottom line of this: we all party during college one way or another. For some, it’s a culture, while for others, it’s a way to escape the stress of academics.

However, one thing all students have in common is an undying thirst to let loose and party before reality kicks in after graduation.

Get on the Whatsgoodly app to question, debate, and reveal the schools and parties you think should be on the list and make your voice heard.

Robert is the Content Director at Whatsgoodly and is well known for his creative mind and wildly outspoken mouth. He helps develop and execute strategies surrounding public relations, communications, and overall brand growth at Whatsgoodly. Robert graduated from the University of Texas at Austin in May of 2015 with a degree in Public Relations, along with a minor in Brazilian Portuguese.

4 Tips to Keep Your Student Loans from F’ing You

A Life After College?