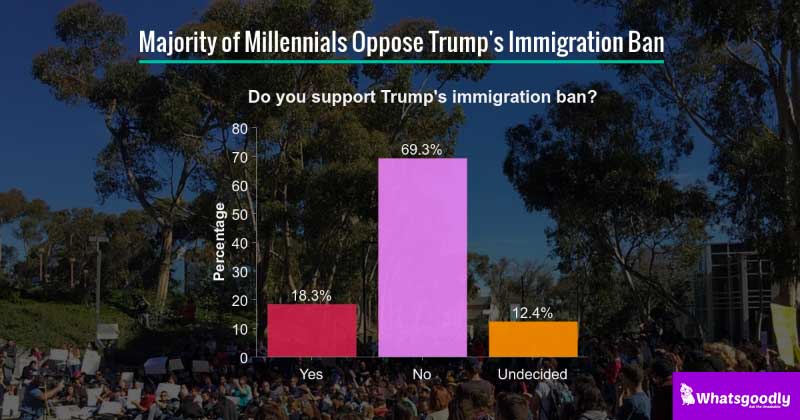 On Friday, January 27th, 2017, Trump signed an executive order suspending refugees from seven Muslim-majority nations from entering the United States. Confusion, lawsuits, and nationwide protests quickly followed the controversial executive order, as many claimed the immigration ban discriminates based on the Islamic faith.

Whatsgoodly surveyed 1388 US millennials on the ban and found that 69% opposed the ban, with only 18% supporting it. Another 12% remain undecided.

Some responders to the survey elaborated on their opinion. A student at the University of Washington and opponent of the immigration ban wrote, “What the hell is wrong with people that they can’t treat everyone as equals.” Another student from the University of Missouri didn’t care about the ban but argued that the issue with green cards was taking it too far. To see more comments or to weigh in on similar surveys, download the app.

Whatsgoodly is a college-based, social polling app that allows users to ask and vote on poll questions anonymously. Without fear of judgment, users are able to vote honestly and have frank discussions about any current event or topic of interest. To read about how Whatsgoodly correctly predicted the millennial vote in the 2016 election, click here.

Methodology: Results for this Whatsgoodly poll were collected between January 30, 2017, and February 1, 2017, from 1,388 millennial respondents aged 14–24 living in 46 states. Whatsgoodly weights its samples by gender and region. Demographic weighting targets are based on the “2015 Annual Estimates of the Resident Population” US Census Bureau Report for the aged 14–24 years US population. For results based on the total sample of national millennials, the margin of sampling error is ±3 percentage points at the 95% confidence level.