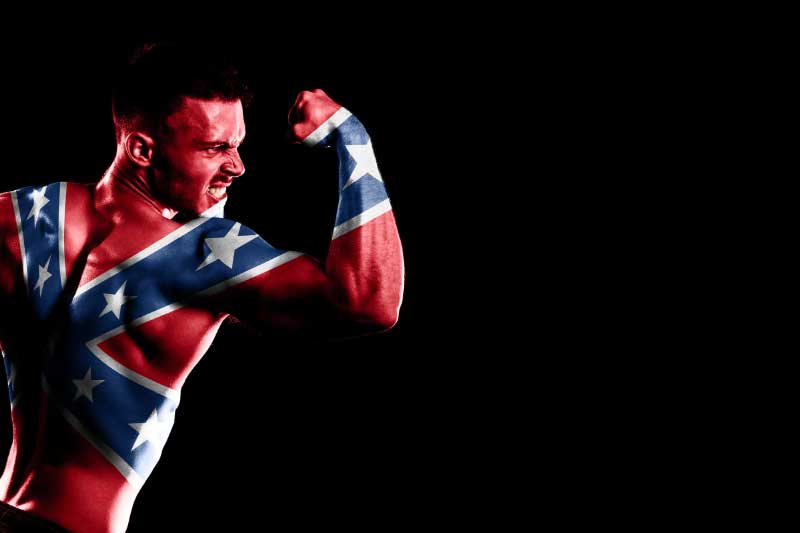 Over 3,200 WhatsGoodly users from over 83 different universities in 30 states chimed in on a recent poll about whether the Confederate flag symbolizes racism or Southern pride.

In this poll, 66% of students said that they view the Confederate flag as a symbol of racism.

The comments section was full of a variety of viewpoints, but most users favored the idea of the flag as a symbol of our country’s racist past.

5 reasons to retire the Confederate flag

“..in this free government *all white men are and of right ought to be entitled to equal civil and political rights* [emphasis in the original]; that the servitude of the African race, as existing in these States, is mutually beneficial to both bond and free…”

“….Our position is thoroughly identified with the institution of slavery– the greatest material interest of the world…”

“…all the States north of that line have united in the election of a man to the high office of President of the United States, whose opinions and purposes are hostile to slavery…” (1). Go ahead and try to argue with direct quotes from the people of the Confederacy that blatantly show the reason they were seceding was their belief in white supremacy and the right to enslave African people. We’ll wait.

The Confederate flag has also been used since the Civil War days as a means of expressing racism towards African Americans. In the 1940s, the Confederate flag was used by the Dixiecrats, a political party that opposed desegregation. They were also pro-discrimination and thought lynching should be legal. Many of the Dixiecrats came right out and said they were “white supremacists.”

In 1962 Ole Miss students began rioting when the government insisted that they allow a black student to attend. The next year the Governor of Mississippi, George Wallace, raised the Confederate flag above the state Capitol building to protest desegregation (2). And, of course, the Confederate flag has been flown by the KKK, though this terrorist group has also been known to fly the U.S. flag.

This study showed that the Confederate flag activated implicit stereotypes against black people. The researchers didn’t stop there. Next, they tested how the presence of the Confederate flag would affect people’s perceptions of an everyday hypothetical black man named Robert.

When participants were in a room with the Confederate flag, they rated Robert more aggressive and selfish, as well as less kind (4). Surely, we can all agree that this is sincerely fucked up. But, as it turns out, the human mind is actually very prone to biases. It’s our job as ethical human beings to be aware when these biases present themselves and actively work against them.

4. It does not express Southern heritage

It’s pretty bizarre to trace your heritage as far back as far as the Civil War and then claim a random battle flag as a symbol of your cultural heritage.

If you’re really into heritage, grab an ancestral DNA test from 23andme and find out who you really are.   Dear White Southerners, you’re not really American. You may be a citizen of the United States of America, but we all know that Native Americans are the real Americans here. You’re of European descent.

Perhaps you’re Scottish or Irish. Many Western North Carolinians, for example, attend the Grandfather Mountain Highland Games each year to participate in a variety Scottish activities. Now, they’ve got some serious heritage going on.

On the other hand, if you’re flying the Confederate flag as a way to symbolize the fact that you love hunting and fishing, perhaps you could fly the insignia of the U.S. Fish and Wildlife Service. It does have a certain style to it, doesn’t it? After all, fishing is a fantastic outdoor activity without any connotations to America’s intensely shameful and white supremacist past. Why would you want to taint fishing and other outdoor activities with the burden of white supremacy? Eww.

Yep, if you’re flying a Confederate flag, you are downright anti-American. Y’all remember that the purpose of the Confederacy was to break away from America and create a new country, right? Supporting a coup is worse than anti-American. It’s treasonous. You absolutely cannot claim to love America and the Confederacy at the same time. It’s paradoxical and, quite frankly, wildly ignorant. Consider the mic dropped.

Confederate flag supporters, the time has come to lay down your beloved flag to rest. You’re clearly outnumbered, just as the actual Confederacy in Appomattox in 1865, which is ironic yet somehow fitting. It’s time to get on the right side of history. Emblazon yourself with the insignia of the U.S. Fish and Wildlife Service to symbolize your hunting and fishing pride. Wear a kilt to symbolize your Scottish heritage.

Who knows—maybe even go make friends with your African American neighbors and ask them how they feel about the flag. All of these activities are guaranteed less controversial and way more interesting than sporting a racist, treasonous battle flag from the 1800s. Otherwise, don’t get upset when you’re called out for being a racist. Because supporting the Confederate flag is racist.